A downloadable game for Windows, macOS, Linux, and Android

This is the complete game containing all previous parts.

Play the first act for free.

This is a story of two magi, Vyn and Ilar, who find themselves trapped in a collapsing tower with their only hope for salvation being a difficult ritual. Or at least that is what Ilar tells you. The thing is - you don’t remember anything, and Ilar’s story makes less and less sense the closer you are to the ritual. Are they hiding things to protect you from the bitter truth, or are they deceiving you for some more nefarious reason?

Guide Vyn’s actions to death and beyond and uncover Ilar’s truth. Are they your colleague, lover or something completely different? Read between the lines of what they are telling you, explore your surroundings for clues and use hands-on deduction to break the viscious circle and set them free.

This Interactive fiction/visual novel hybrid is made by two people - Ze and Nim and it is our very first game! It features hand drawn illustrations, animated scenes and an original soundtrack, all working together to immerse you into the world of Tal’Dun.

The game includes descriptions of sexual themes, violence, blood, physical and mental abuse, self harm, death, and suicide. Characters are going through emotional struggle and are dealing with a life threatening situation.  If you are sensitive to some of this content please proceed  with care. Recommended to a mature audience.

We wrote the guide for the true ending and achievements, but I would recommend trying to figure the mystery without it. The ending is very satisfying and reading the guide will take away from the experience. Once you see the truth, you can’t unsee it.  Being confused and lost is part of the story, it is how Vyn feels. Try to pick different choices and pay attention to the details and don’t lose hope. Several people said they wished they had more patience before reading the guide, you have been warned.

Want to stay up to date on what we're doing?

Or join our Discord

In order to download this game you must purchase it at or above the minimum price of $19.99 USD. You will get access to the following files:

I saw somebody playing one run of the story and not being sure if the game is done, and even if I can’t reply directly to the rating comment, I might as well say something here. X) - on average players don’t get the real ending until 7-12 hours of playing,  (7 hours is with guide usually) while some people spend 20-30h for a completeonist run. Each run is part of the big story and by playing one run you barely even stirr the water. You need to play several differenent runs to be able to find the ending. Also, most of the explicit romantic stuff is in that true ending, so yeah. ^^

Stunning. Just ... stunning. Precious few times have I been this emotionally effected by a visual novel.

I feel like I'm limited in what I can divulge because I don't want to accidentally spoil anything and I don't know if I could do it justice anyway, but the art is beautiful, the atmosphere haunting, and there is at least one music track that gets me misty-eyed as soon as it starts playing. I'm really, really happy I gave this a shot.

I first bought this game - though finding $20 a bit dire - because I was intrigued by the unique art and interesting UI. I did not expect the game to be Fantasy Zero Escape. ZE is one of my favourite game series and I've always been enamoured by the fact that it uses the video game medium to its full potential: the player remembers information through different playthroughs, and that in turn changes the route the game takes. I was very surprised when it turned out the game was taking this route: you could use knowledge gained on other playthroughs in times where the character shouldn't have that knowledge yet, and that in turn opens up more to discover.

What I didn't like as, unlike in ZE, this seems mostly meta. Vyn doesnt seem to be aware or question why they know things ahead of time or from places they never visited. This seems to be handwaved as them retrieving memories from their past self or advice from the sage beyond death, but the "loop" of the game constantly returning itself to the same point in time at the start of every playthrough is not addressed in any way. In ZE, this is explained as time existing in a 4D or 5D space in the same way as consciousness, with the physical body existing on a 3D plane. If this is explained in COT, I either missed it or didnt understand it.

Putting together the clues for the true ending felt truly exhilarating at times. It's a hark back to the days where this was how video games were played, with people writing down the important things, though now in an era of quest logs and save files it's gradually becoming a lost art. It took me seeing the body with the carving on its arm about four times before I realised I was probably meant to be taking notes here. I enjoyed that! I enjoyed the feeling that this was my work and my mystery to solve, and that the player is rewarded for paying attention to and inspecting art in a game rather just mindlessly consuming it. I love that there are details hidden in the art, so one has to inspect and appreciate the work put into it. The philosophy, also? I love a game that makes you go hmmmmm. 🤔

The fantasy setting is unique and mesmerising. It's been a long time since I've felt so engaged by the lore of a work. I could read books of this, I really could. It has overall a very dreamlike quality with its striking metaphors and focus on illustrative physical sensation, and the washed-out ink drawings, with their great detail and high constrast, really serve to emphasise this.

The twist was great - I saw it coming, but it was still really interesting to see it play out. I think thats the best you can ask for, really. The most out-there twists can be ruined by bad writing, and even the most cliche can be elevated by good writing, and I really think you stuck the emotional and dramatic landing in every way here. The writing really shone here. Fantastic.

Theres some typos, like fiercely being written "fiercly" and rubble as "rubbel". "They leaned real close" in the story about Ilar seems too modern and colloquial for use in writing. "Until not a single piece bare any resemblence of life" should probably be "bares", since "piece" is one thing. Theres also a bug at the true end just before the ritual where if you have a custom name (and also in the third person epilogue), the player is still referred to as Vyn.

That said, this is unlikely to be a game I forget soon. It's something that has had a profound effect on me, that has left me thinking. One that's left me with mixed emotions in the best possible way. It's haunting. It's well worth the price I initially sniffed at. Thank you for this.

Thank you so much for leaving such a long review. I know some things require some squinting to be make complete sense, it’s because it’s our first story we wrote and Some things I maybe didn’t explain the best. For the next one we will try to do better. :) And thank you for finding these few typos. I’ll make sure to fix them tomorrow. ^^

Game has an Ice Wind Dale visual style, I'm I right?
Hey, I could create a Spanish translation for the game, are you interested?

Hmm, not exactly, you can see the style from the screenshots. Since we currently lack any extra funds, we are doing only volunteer fan translation with a small revshare.

revshare is fine for me, just sent you a DM on DevianArt

Can you join our discord and we'll talk there?

Absolutely loving the fact I just happened to stumble across this wonderful game! It already seems like I've been playing forever but still haven't been able to figure out the true ending.. I am now just having an error where the option to save or load files has disappeared. Even with relaunching the game the load files cannot be clicked, making it hard to start from the very beginning each time. Is this an error or apart of the gameplay? Again loving the game it's amazing!

I’m so happy to hear you are enjoying it! We are trying to solve this problem about save/load dissappearing and we managed to figure out that if you scroll your mouse they will appear again. Do you mind telling me more about the situation where this happens? How many save slots you think you had filled at the time the bug appeared? Did you have the Act1 or 2 installed before you downloaded the full game? Does this happen when you access  saves both from main menu and from in-game? It will help me pinpoint what exactly went wrong. >_<

Also, if it’s not too much trouble, can you send me a screenshot of you save game folder? It’s in %appdata%/Renpy/COTTD

1. I believe I had just finished filling the save slots and was re-saving over them. 2. I did not have act 1 nor 2 installed beforehand. It happens from accessing it from the main menu and in-game. Thanks for your help I can't believe all I needed to do was scroll extra hard ahaha. Heres the shot of my save files. 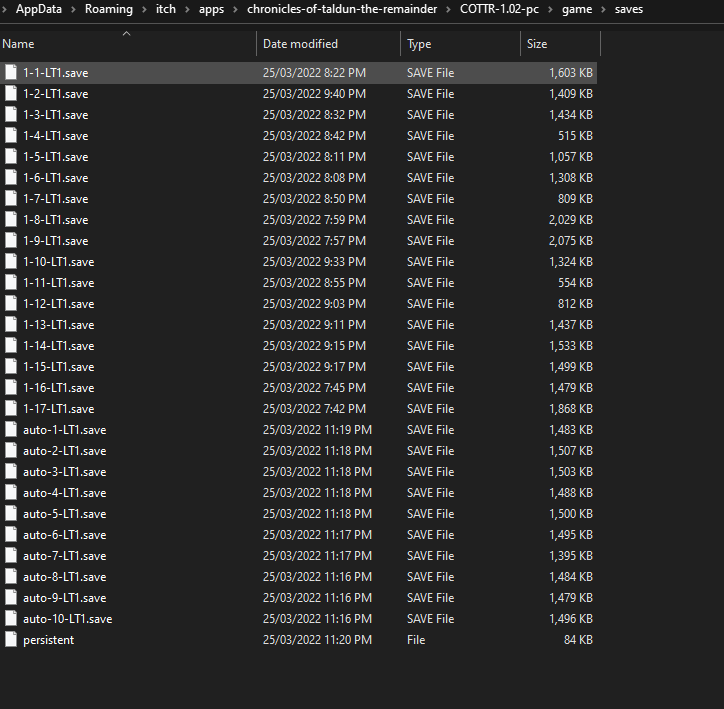 Thank you so much for your feedback! We just released version 1.04 which should hopefully prevent this from happening again.

Reply
Nicholas and/or Lauryn185 days ago(+2)

Having played many many builds of this game, I'm really impressed with how it's innovating vn gameplay. The artwork is STUNNING, and the music literally gave me goosebumps the first time I played through. An incredibly thoughtful game that in turn demands you think differently about how gameplay works. More of this, plz!

Hi I wanted to say that I bought this game in steam because it looked interesting but I did notice somethings that might need to be looked at.

After I installed the game and opened it, I saw it has some gallery pics unlocked (or stuff in the events, places and achievements unlocked). When I went to settings it had an option to reset progress which I did. That seemed to reset it, but I feel it's best to tell you in case it's a universal thing.

Hey, thanks for reporting this, we put up a patch for this, hopefully it'll work properly now. :)

I've been following the development of CoT:TR for several months, and I'm so happy to finally purchase and play! Congrats!

Thank you so much, I hope you will enjoy it!

I bought the steam version, I wanted to ask is there any steam censorship or are both games the same?

They are both the same. 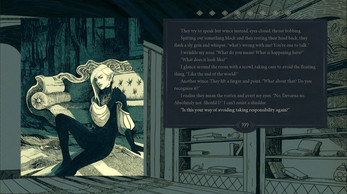 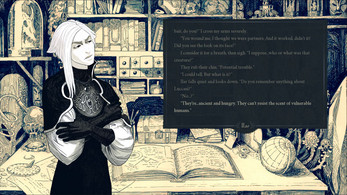 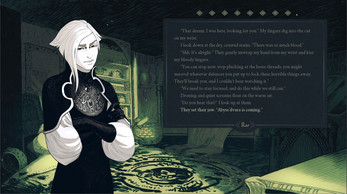 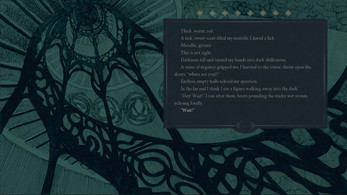 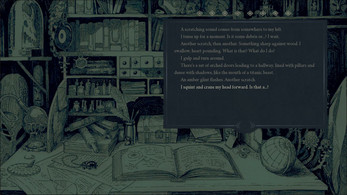 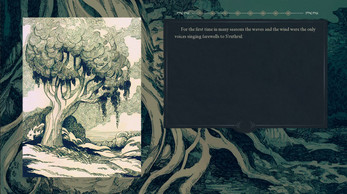 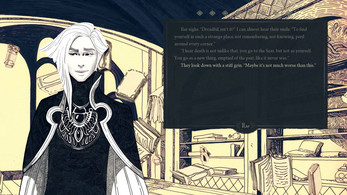 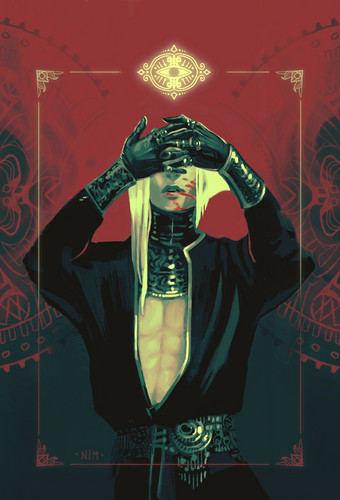