I disabled the  download of this file while I’m working on a new version. It should be done this May.

The Remainder is a dark fantasy story made of mystery, love, and lies.

Act 1 - Available Now on Itch and Coming Soon to Steam.

A stone tower.
You're woken up with no memory of your past by an elegant, enigmatic stranger called Ilar who tells you that a door to the abyss has opened up and threatens to consume you, unless you do exactly as they say.

A magickal mystery.
You're sucked into a vortex of forces beyond your reckoning-dark magick, bizarre artifacts, shadowy stalkers, and a past life you've shared with the stranger that they do everything to hide.
Armed with the knowledge that you were a High Magus, and that a botched ritual of yours caused the disaster and your amnesia, you must summon your wits, courage, and force of will to rediscover the spell and undo your mistakes.

A treacherous path.
Finding the tower's secrets, however, will not be easy, for they're locked tight within your research journal, written on scattered letters, and lying between the lines of Ilar's words.

On top of that, danger waits around every corner-spells that warp your mind and body, sinister creatures who lurk in the dark recesses, and a relationship with Ilar that borders on explosive at times- everything seems to conspire against you.

But all is not lost, for there are fleeting moments of reprieve-an achingly comforting, recovered memory, an unexpected visit from a loyal companion, a touching moment of connection with Ilar-lifelines and breadcrumbs pulling you inexorably toward an unsettling conclusion.

Can you piece together the scattered puzzle of your life? Can you save yourself and Ilar? Can you keep your mind in one piece until the end?

"Winter. The burning, spherical body of Sruthru the Primordial Fish rises languidly above the northern horizon, then sinks back down, its feeble illumination hardly disturbing the twilight that will last three moons.
Fog dunes thick enough to grasp glide across the seamouth marshes, flylamps dance and mate within them, flitting stars in the throes of ecstasy, on the brink of death.
The Seas will have their Waters, as it will have all our Waters one day."

Experience a unique, bizarre world that draws from diverse inspirations such as:

Briefly inhabit a world of ritual magick, pre-industrial technology, and a culture that marries ancient religions of the orient and occident.

Be lured into an occult world by artwork made to resemble alchemical manuscripts-intricately hand-drawn with pen and ink, then edited and animated digitally to bring to life.

Choose who becomes your friend, enemy, or romantic interest.

Experience romance free from restrictive gender stereotypes. Our characters are non-binary, and sexual features are not over-emphasized, narratively or visually, making it easier for you to picture yourself in the story.

Help fund our development by buying us Ko-Fi.

-Early beta access to future Acts of The Remainder

-Every issue of Glimpses Beneath - Art and Lore book

-OST when it's available

Click below and head over to our ko-fi page to see all the details!

Newsletter subscribers get a sign-up bonus! The first issue of Glimpses Beneath-Digital Art & Lore Book from The World of The Remainder. Gorgeous illustrations, short stories, Ilar's letters, concept art, and more, straight to your inbox. No spam, unsubscribe at any time.

You'll also receive one out of every 3-4 short stories from Story and Tea with Ilar, depending on their size. But sadly, without the tea or the biscuit. I've been told that those things don't grow on trees.

Love what we're doing? Want to support us in other ways? Here's how:

-Tell your friends about your experience playing The Remainder

We're just two regular people making a game out of our passion for stories, so any kind of support is warmly appreciated. Thank you!

Be aware: The game will include descriptions of violence, death, and suicide, as well as mentions of mind-altering substances and activities. It’s recommended to a mature audience.

The artstyle is really something ! I love it!
This comes from a digital artist :D :D :D

Thanks, it's always nice to be appreciated by another creator. :) 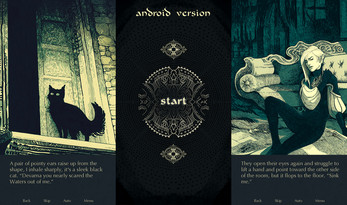 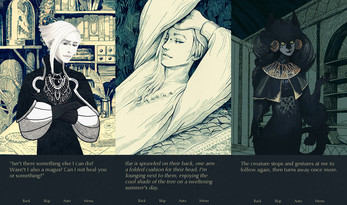